"This is the Wisconsin revolution, and it's powered by beer!"

John Nichols, associate editor of the Capital Times and Washington correspondent for The Nation, gave a rousing introduction to Friday's "Save Our Craft Beers" rally, held on the State Street side of the Wisconsin state Capitol at 5:00 p.m. Protesters gathered to unite in opposition against a measure added to the budget by the Joint Finance Committee that effectively bans brewers from purchasing wholesale distributors and, according to the Wisconsin Positive Business Alliance, requires new wholesalers and breweries to secure 25 "separate, independent retail customers before a wholesale license can be granted."

Borrowing from Martin Niemöller, Nichols said the following to a crowd of about 100: 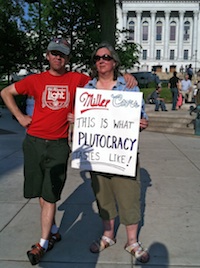 Nichols said when the German immigrants came to Wisconsin, they brought two things: their revolutionary ideals and their beer recipes. After searching far and wide, they decided the only good place to make beer was Wisconsin.

A crowd member who proclaimed himself a "beer lover" echoed the historical sentiment: "Beer is brain food! It's also democracy jet fuel. When you look at the Constitutional Convention, what were our founding fathers drinking?"

Whether they feel it's an intentional target or the side effect of a battle between MillerCoors and Anheuser-Busch, small brewers feel wronged by both the proposal and the way it was introduced.

"Why is this a budget issue? Why is it going through the budget office? Why isn't it being discussed more in depth? Why can't we have more of a say about how this is going to affect us?" asked John, an employee from O'So Brewing Company located in Stevens Point. An Ale Asylum (located in Madison) employee agreed.

Jim McCabe, owner of the Milwaukee Brewing Company, threw out a few barbs directed toward Gov. Scott Walker and Company.

"How are we liking the new administration with no special interests, huh?" McCabe asked. "I don't know if you guys have done this Milwaukee drive in the last month; it's a little rough. I was a little late getting here. I could've taken the train, maybe -- oh, I don't think so."

Several brewers expressed a growing frustration with distribution companies that don't care about individual beers the way small brewers do. 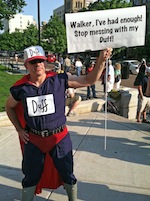 If the beer is good, brewers should be able to sell it to whomever they want to, without dealing with distributors who might not care about it, John from O'So said.

Robin said Vintage would not be affected by the current proposal since it's a brew pub and not a brewery, but said, "Just to show our solidarity with our fellow brewing companies, Vintage did pull off all MillerCoors products yesterday. I heard that about eight representatives from MillerCoors started calling Vintage yesterday, wanting them to put it back on. No. No more."

Robin encouraged other local bars to remove MillerCoors products from their product lists, as well.

Another self-proclaimed "lover of beer" reminded the crowd that the measure can still be removed from the budget. Nichols did the same.

"This is a winnable fight," Nichols said. "A lot of these struggles seem very big and very hard. This one only requires a legislator to sponsor an amendment to take this out of the budget bill. This is a do-able thing, and if we organize, we win. We brought 150,000 people out to this square to fight them in March, and I'm telling you, if they keep this beer thing in, and we keep organizing, we're gonna bring 200,000 out to stop them from taking away our collective bargaining rights, taking away our SeniorCare, taking away our BadgerCare, taking away our control of our public utilities and taking away our beer. That's the last thing we needed."

The level of care that exists with smaller brewers and their beers was a common topic.

McCabe referred to craft brewing as an "artisan style of brewing." He referred to legislators who talk about a three-tier system: brewers, wholesalers and distributors.

"But there's a fourth tier," McCabe said. "Craft brewers care about you guys who drink our beer. We're trying to get from the first tier to the fourth tier, somehow."

First, they could exempt those brewers who were below some output to allow start-ups to get a toe-hold. If it's all about preserving competition, then let the innovative little guys compete. Or is it that the big guys see the little guys steadily eating away at their business because they make a good product (rather than a generic product for the masses)? Second, it's a real stretch to see how this is a budget item. Take it out of the budget, and debate this on its merits. Let's continue to keep Wisconsin as a beer mecca and create some of those 250K jobs. What do we want? BEER! When do we want it? NOW!
When I lived in Australia, many of my friends or their Dad's brewed their own beer at home (beer prices are much higher in OZ), So they always had a cold one ready to offer and they could proudly say they made it themselves. It become their hobby. Many people wonder how to homebrew and a lot of people either think that if they home brew their own beer, it will either be expensive, taste Disgusting or, be Really Difficult to Do. But it's not complicated at all, in fact, it's fun and rewarding. Here's a link to get started homebrewing our own beer. http://bars-and-bartending.com/how-to-homebrew.html has all the directions, ingredients and supplies.
Why should any government of the US be concerned about a foreign owned beer company. Craft brewers are American owned, and employ Americans. Small business is what works.