Moreover, Neuenfeldt talked about the rush Walker and the legislature are in "to ram through their right wing priorities on corporate deregulation, school privatization and voter suppression before recall elections." 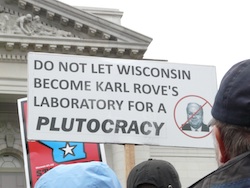 "We need fight back against this [budget]," said Alex Hanna, the President of the Teaching Assistant Association. One of the TAA's main concerns is the new proposal to privatize the University of Wisconsin system. "Walker has full support across State Street from Chancellor Biddy Martin…who proselytized about the virtues of the public authority model."

"How could we take the privatization of public education?" yelled Hanna.

Christian Pacheco, a graduating high school senior, revealed in front of the throng of Wisconsinites that he was an undocumented student. "My dream is to work hard and go to a UW school just like my peers," said Pacheco. "If I am force to pay out of state tuition, out of my pocket, as Walker's budget proposes this dream will be crushed."

The crowd chanted in support of Pacheco and the courage of shedding light into his experiences as an undocumented student.

"If instate tuition for students in my situation is taken away, it will change my entire future it would ruin my plans to attend UW Parkside to receive my diploma," said Pacheco. Following Pacheco, other speakers talked about the impact Walker's budget would have on education and unions. 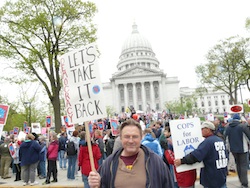 "We aren't dealing with Republicans," said Mitchel. "Abraham Lincoln was a Republican, these are radicals."

The firefighters and police who were exempt from Governor Walkers collective bargaining bill immediately joined the protests against the bill recognizing that their unions would not continue to be exempt. Sure enough, this week a bill was introduced into the state legislature by Independent Representative Bob Ziegelbauer of Manitowoc that would roll firefighters and police into the collective bargaining provisions of the Walker bill.

Another hot topic at the rally was the upcoming recall elections. The next step, said Former Mayor Dave Cieslewicz, is to "roll the recalls."

"You need to campaign across the state," urged democratic Senator Jon Erpenbach, who regularly appeared on Jon Stewart's Daily Show while hiding out in Illinois to draw attention to the Walker bill. "You can vacation in Minocqua and help Jim Holperin, you can spend some time in Green Bay and make sure Dave Hansen holds on to his seat…the point is you have your choice and you have to do it…the Democrats need your help."

The Wisconsin Government Accountability Board will likely schedule the recalls for six Republican senators and three Democratic senators in mid-July.