This week I received a Ridenhour Prize for my book, Deadly Spin. I'm honored to receive the award, especially in light of my fellow recipients: former Sen. Russ Feingold of Wisconsin; the producers of a film called Budrus, about attempts to find non-violent solutions to the strife in the Middle East, and Thomas Drake, an National Security Agency contractor who blew the whistle on what he believed were corrupt practices. Past honorees have included Bill Moyers and Bob Herbert. Elite company.

It is always nice to be recognized for one's work. The prizes are supposed to honor those "who speak truth to power." But the honor is also ironically unfortunate. The need to write the book at all, to illustrate how selfish profit motives too frequently take precedence over the health care needs of real people, remains a tragedy. And sadly, that continues to be the case, even after so much has been revealed about the inner workings of insurance giants and even after a bruising political battle has been waged to change how health care is delivered in America. The fact is, I shouldn't have had to write the book. There shouldn't have to be an award for people who simply do what is simply right.

Want evidence that not much has changed? Look no further than the current budget debate. House Budget Committee Chairman Paul Ryan (R-Wisconsin) presented the GOP's blueprint last week. The plan sounds great -- lower taxes, lower deficits, and a more responsive government. As a former professional spin doctor, I can assure you that if something sounds too good to be true -- if it is made to sound too good to be true by professional wordsmiths -- then it probably is. As I indicated when that budget plan was released, Democrats -- and journalists -- would be wise to follow the money.

Insurance firms are like other companies. They have a fiduciary responsibility to provide a strong return for shareholders, and they are good at it. Given the reach and power of the insurance lobby in Washington (and in state capitals around the country), it is profoundly unlikely that something as significant as a massive Medicare overhaul would happen without their input.

And insurers are unlikely to simply surrender in the health care debate, to suddenly decide that shareholder value doesn't matter, or to toss up their hands and say "do whatever you want, just let us know what you decide." I've been in a lot of meetings with a lot of senior executives and none of them has ever said, "Money doesn't matter, let's just do what's best." 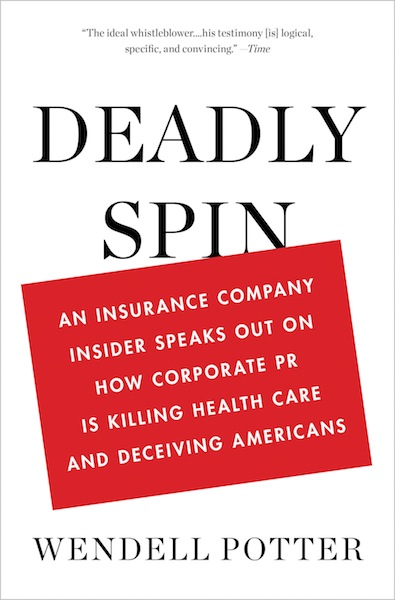 That's not a knock on those executives; they were doing their jobs in protecting their industries. I will bet you a copy of my book that the insurance industry helped shape, directly or indirectly, chairman Ryan's proposals. They would not support block granting Medicare and leaving millions of Americans to fend for themselves in the insurance market if it weren't good for business.

People Need to Understand the Stakes

Again, this is not an attack on insurance executives. If companies stopped making money, if they put people before profits, they would soon be out of business. That is why federal policymakers need to pay such close attention. Government's job is to ensure there is a fair balance, that both consumers and shareholders are served.

The other reality is that Chairman Ryan and his colleagues wouldn't pursue this approach if they didn't think voters would support it. Money and pressure from industry can be powerful, but voters are even more powerful. Just ask any of the Democrats who faced angry mobs in town hall meetings shouting industry-supported half-truths and deceptions during the August, 2009 health care debate.

Industry relies on money for success, politicians rely on votes. Money can help influence elections but ultimately what matters is what happens in the voting booth in November. If people knew and understood the stakes, the motivations of the advocates, and the actual impacts of the decisions on their lives, Ryan's proposal wouldn't see the light of day.

And of course these truths are not limited to the health insurance industry. Every industry has a raft of lobbyists and professional spinners. There are people like me in the agriculture industry, the manufacturing sector, telecommunications, and every other industry that provides the services on which we rely. And at every turn the industry insiders are working with policymakers to maximize profits and electoral success.

That is why the Ridenhour Prize feels so important. This award recognizes those who dare to shine light in the darker corners of our society, those who are willing to stick their necks out for what is right. Some of us have paid a high price for this. Sen. Feingold lost his seat, and Drake faces federal espionage charges. I am no longer a corporate executive, and that's my choice. In recognizing us this year, and in honoring others in past years, the Ridenhour Prizes shine a bit more light in all those dark corners. Hopefully, they embolden a few others to say, "This isn't right." And maybe, eventually, they help create a society in which no one gets a prize for simply doing what is simply right, because everyone is simply doing it already.