You Can Run But You Can't Hide: Protests Follow WI Senators to DC | PR Watch

You Can Run But You Can't Hide: Protests Follow WI Senators to DC 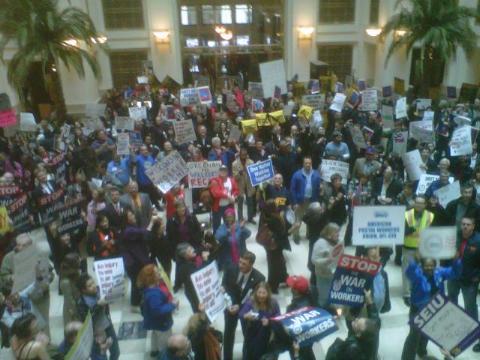 Public Citizen's James Ploeser was one of the many Wisconsinites at the rally. Ploeser, who visited the Wisconsin Capitol at the height of the protests, said the D.C. rally was "amazing!" 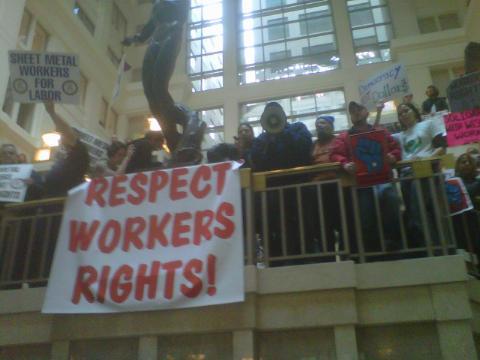 "Probably 300 people stormed the lobby, and there were probably another 600-1000 outside picketing the whole building," Ploeser said, noting that the protesters marched to the White House from The Homer Building, then to protest in the lobby of the Chamber of Commerce. 70-80 protesters marched back to The Homer Building after leaving the Chamber of Commerce, and many of those protesters were from Wisconsin, according to Ploeser.

The crowd of D.C. Cheeseheads joined together at a makeshift podium in The Homer Building's atrium to sound off on Walker's "budget repair" bill that eviscerated collective bargaining rights for public workers, and other radical provisions in Walker's proposed budget bill including a $1.6 billion cut to schools and localities.

BGR, or Barbour Griffith & Rogers, is a conservative D.C. lobby firm founded by Haley Barbour, with a long list of clients including financial, pharmaceutical and defense interests. Read more about BGR in our Sourcewatch profile of the firm: BGR Holdings.