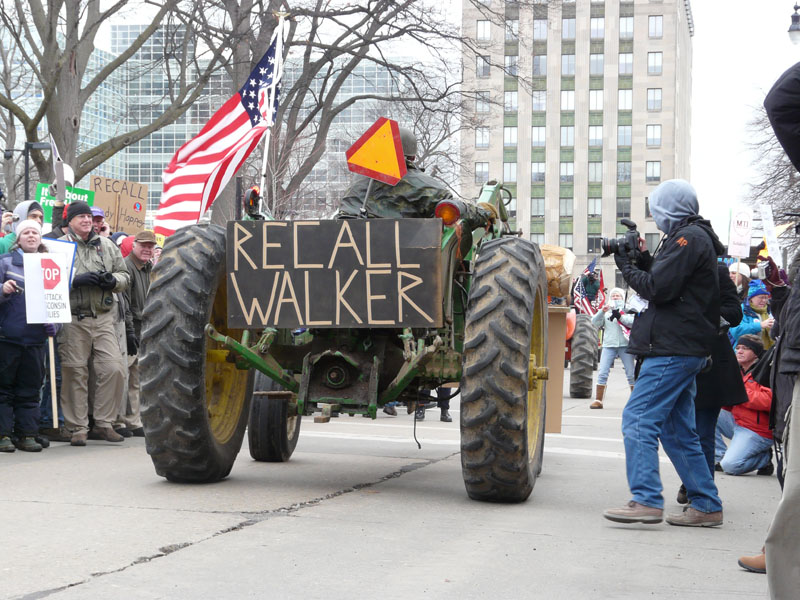 Sam Anderson, a retired Teamster who now runs a hobby farm in Marshall, thought Scott Walker needed to listen to the people. So did Elliot Zander, 15, who works on his family's organic vegetable and grain farm in Columbus, as well as Nick Huyvetter, a dairy farmer from Fairchild.

These and other farmers brought their tractors to Madison in the early morning for a mid-morning Tractorcade organized by the Wisconsin Farmer's Union and Family Farm Defenders to make their point. Fueled by free coffee, carrot cake and coffee distributed at the Alliant Energy Center staging area by businesses including the Mermaid Café in Madison, farmers drove 53 tractors from across rural Wisconsin to the Capitol Square Saturday morning to roaring cheers of, "Thank you!"

The Tractorcade led the biggest day of protests yet in Madison against measures pushed by Governor Scott Walker and passed this week, eliminating most collective bargaining rights of the state's public employees.

Doral Richardson, a Milwaukee farmer who grows produce that feeds 250,000 yearly from food pantries and soup kitchens through the Hunger Task force, said he had to stand up today because Walker and the Republican majority in the state Senate and Legislature are attacking not only the working people of the state, but also the poor.

"I'm here representing the folks we feed, who cannot be here," Richardson said.

Farmers "pull together" with workers, as their slogan says, because Wisconsin has a great tradition of the people supporting family farms. If those people are under attack, so are farmers. The way Barb Perkins looks at it, it's like a big circle.

"There are effects of the governor's budget bill that will have a devastating effect," said Perkins, who with her husband Dave Perkins run a large Community Supported Agriculture farm near Blue Mound. "Taking away Badger Care and the Medicaid provisions will affect rural Wisconsin and push us into poverty."