The Democratic 14—the state senators who fled Wisconsin to Illinois in an effort to slow voting on a bill that strips public workers of their collective bargaining rights—stood tall and proud Saturday, thanking the protesting Wisconsinites for their enthusiasm and fiercely strong presence in Madison the past three weeks.

"Thank you for being our voice while we were gone!" shouted Sen. Spencer Coggs, D-Milwaukee, to the massive sea of people filling the Capitol lawn and spilling over into Madison's downtown area. 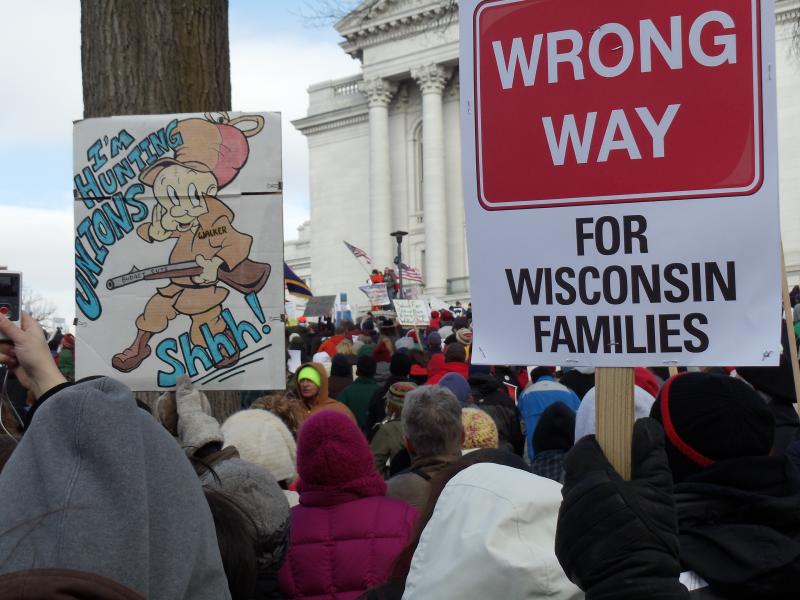 "We have become symbols of hope to hundreds of thousands of people," continued Sen. Bob Jauch, D-Poplar.

The Wisconsin 14 applauded protesters for being unwilling to give up their fight even after state Republicans—in a surprise, sneak-attack move—amended the "budget repair bill" to contain only non-fiscal items, such as removing collective bargaining rights, and subsequently passed it Thursday, March 10.

Maintaining solidarity with the state Assembly Democrats, the Senate Dems said Wisconsin workers' next steps are to vote in the spring elections April 5 for JoAnne Kloppenberg, and aim to recall Walker and other state Republicans.

"Now we trade in our rally signs for clipboards and we take to the streets to recall the Republicans," yelled Sen. Chris Larson, D-Milwaukee. "And in one year, we recall the governor that refuses to listen!"

The crowd cheered, which appeared well in excess of 100,000, bundled in their Wisconsin Badger coats and hats, waving signs with slogans such as, 'Scott Walker is a Koch head' and '34 years as a teacher? Can't scare me!', as it swelled to its largest numbers in the late afternoon.

"It's so good to be home in Wisconsin," Miller said as the crowd roared. 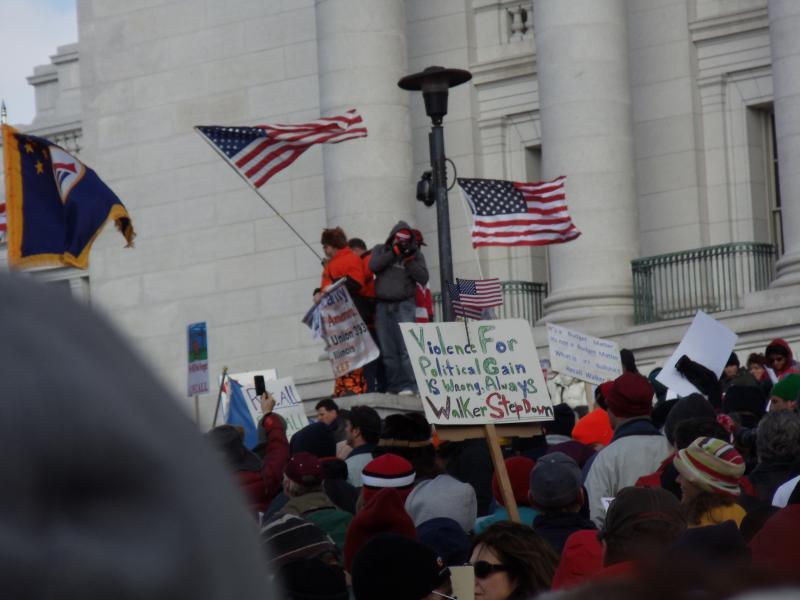 Green Bay, WI, native and "Monk" actor Tony Shalhoub attended the event on behalf of the Screen Actors Guild in a show of solidarity for the workers fighting for their collective bargaining rights in Wisconsin.

In the afternoon labor leaders took to the stage to remind people that the fight was not over and that the next task was to recall 8 republican state senators. The square was surrounded by tables where volunteers took recall signatures from constituents of the eight.

Marty Biel, head of AFSCME Council 24, was the last speaker on the stage, "AFSCME was born in Wisconsin and we have seen governors come and go. There is one thing this band of thieves simply cannot take away from us and that is the heart and soul of Wisconsin. They can never steal it, because they can't find it, they cant even see it, even when it poured in to the Capitol building week after week," said Beil. "We will win these rights back," he vowed.

Erica Pelzek is CMD's environmental, agricultural and food rights reporter. She is based in Madison, Wisconsin.