5:03 p.m. - Brendan Fischer sends reports that rally leaders are urging protestors that simply protesting and being present in the capitol is not enough, they must also write letters to representatives and speak at hearings: the goal is to change minds.

3:00 p.m. - DESPITE FREEZING RAIN AND SNOW, INSPIRED CONTINGENT OF PROTESTORS DESCENDS UPON CAPITOL SUNDAY FOR RALLY

The rally was indoors in the Capitol Rotunda, unlike the past few days' speaking events, due to weather.

Carol Weidel, a UW System programs analyst with pro-union sentiments, reported from the rally Sunday. She said chants rang out of, "Hear Our Voices, Hear Our Voices" before the speakers took the stage in the Capitol Rotunda. When the firefighters made their presence known at the rally, she said, they were met with chants of, "Thank you, thank you, thank you!"

"Walker's bill goes too far. It denies workers their rights and it has nothing to do with the budget," declared WisconsinAFL-CIO President Phil Neuenfeldt. "I was raised to believe that government was here to protect our rights not take away our rights."

Neuenfeldt continued, saying he wants to open up a dialogue and move the state forward to protect our rights.

He noted there were hundreds of people in Times Square in New York City Saturday night shouting, "Kill the bill!" in solidarity with Wisconsin union workers.

38 states will rally next week in solidarity with the unions.

A middle school student, Haddi Tanner, also said his piece. "If educators don't get time to prepare and plan, we don't get an education," he said, referring to the collective bargaining rights that would be stripped from teachers under Walker's bill. "We're learning about speaking up for our rights. It's happening here—it's happening all over the world."

Tanner ended by leading the crowd in a chant: "Show me what democracy looks like!"

Amusingly, Jamie Domini, a Wisconsin teacher, took on her authoritative role as an educator during the rally and made everyone in the Capitol pipe down and "quit talking."

"I want people way up there on the fourth floor to be able to hear me!"

Ron Domini, her father, worked for AFSCME for years. When he passed away, Jamie was left with his ashes, not knowing where to scatter them. Saturday, she brought his ashes to the Capitol, knowing that he would be in staunch support of the protests.

Domini also said she was able to speak to the Joint Finance Committee, and thanked them.

"The time to sit on the sidelines is over. We can't sit down," she said. "Isn't it lovely that tomorrow is a furlough day? They need to get down here," referring to state employees who have Monday off due to mandatory, unpaid state furlough days.

The rally ended with Madison's own Sean Michael Dargan, of The Kissers and other bands, playing the bagpipes and leading the crowd in cheers.

"Police estimated that 68,000 people crammed Capitol Square on Saturday, including 60,000 on the grounds outdoors, in the largest day of protests yet. Saturday featured the first time that Walker supporters joined the throng, but their numbers were swamped by his opponents."

Tea Party activists around the state are threatening recalls of Democratic senators who fled Wisconsin to prevent the State Senate from being able to meet quorum to vote on Walker's budget repair bill. Two Illinois Tea Party activists accosted Sen. Jim Holperin, D-Eagle River, and Sen. Bob Jauch, D-Poplar, with questions and a video camera as they were getting into their car in Rockford, Ill. The YouTube video has gone viral and can be seen here.

ABC News reports this afternoon that Gov. Scott Walker will appear on "Good Morning America" on Monday. Walker will be interviewed by George Stephanopoulos. Walker also is scheduled to be on MSNBC's "The Daily Rundown," on Monday. 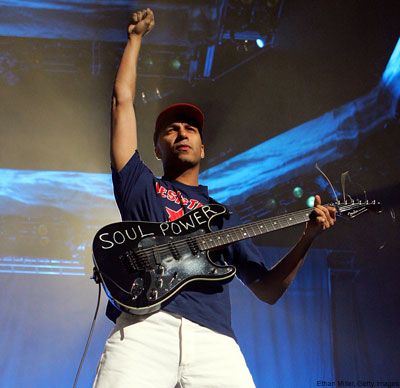 Sunday there will be rallies at 12:00 noon and 5:00 p.m. For those coming from out of town to attend the protests, go to the protester information booth, 1st floor in the capitol for guidance. Other events are also happening around the state -- find those here.

Keep in mind that Sunday is expected to see snow and freezing rain. If you come from out of town, the folks running the information booth are helping match people up with lodging and room shares.