Another Sickening Partnership: The CEO of City of Hope Profits From Causing and Curing Disease | PR Watch

Another Sickening Partnership: The CEO of City of Hope Profits From Causing and Curing Disease

An earlier PRWatch blog exposed an unseemly partnership between the American Heart Association and Rite Aid Drug Stores after AHA teamed with Rite Aid to promote the "Go Red for Women" campaign to increase awareness of heart disease in women. AHA selected Rite Aid as its partner for "Go Red" even though Rite Aid sells cigarettes, a leading cause of heart disease. This bizarre alliance gave Rite Aid the ability to brag publicly that it was "taking a stand against heart disease in women" while simultaneously displaying "healthy heart" posters alongside cigarette displays in its stores across the country. In another unseemly alliance, it was revealed that Eugene Trani, the President of Virginia Commonwealth University, which operates a medical center, school of public health and medical school, was found to be accepting a $40,000 annual retainer, plus fees totaling $3,500 and stock options, for serving on the board of the Universal Corporation, a leading global supplier of tobacco leaf.

The public is often unaware of such unethical relationships among high-profile public health groups and figures, which only helps perpetuate them.

Now another prominent public health figure has been found to be profiting personally by both causing and treating tobacco-related diseases. Michael A. Friedman, M.D., the Chief Executive Officer of the prestigious City of Hope National Medical Center in Duarte, California serves on the Board of Directors of the Rite Aid Corporation, the same cigarette purveyor that allied with the American Heart Association to "fight heart disease in women."

The City of Hope (COH) has an excellent reputation in the field of cancer treatment. It even has its own Lung Cancer Treatment Program that offers the most advanced procedures and technologies available to treat this dreaded disease most iconically linked to cigarette use. The COH was on the cutting edge of public health policy when it banned smoking entirely from its campus in 1989, and was richly rewarded with a 42 percent decrease in smoking employees by 2002. COH also has a strict policy prohibiting its scientists and physicians from accepting research funding from tobacco companies.

How amazing it is, then, to find the CEO of the City of Hope profiting from -- of all things -- cigarette sales.

Friedman is a medical doctor, board certified in internal medicine and medical and oncology -- the study and treatment of cancer. Prior to accepting the CEO position with City of Hope in 2003, Friedman worked for the National Cancer Institute and served as a deputy commissioner for the U.S. Food and Drug Administration. He has spent the majority of his medical career in cancer diagnosis and treatment. Friedman was even awarded a Surgeon General's medallion in 1999 for exceptional achievement to the cause of public health and medicine.

According to Rite Aid's 2007 investor's annual report, Friedman joined Rite Aid's Board of Directors in 2004. The company derives about five percent of its profits from cigarette sales. In 2007 Friedman earned $202,208 in cash, fees and awards from Rite Aid as a result of his position, meaning he earned about $10,000 from cigarette sales that year. He owns 116,668 shares of common stock in the company. Cigarette sales are mentioned several times in the 2007 annual report.

It's All About Profits, Not Health 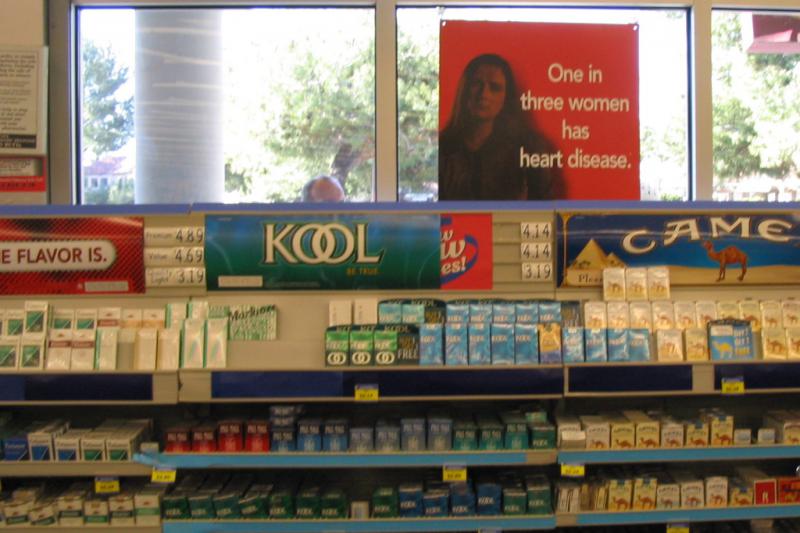 Public health advocates have long been pressuring Rite Aid and other major pharmacy chains to discontinue cigarette sales, pointing out that it is inappropriate and unethical for pharmacies, which trade on a healthful image, to profit from a deadly product. In 1999, the Pharmacy Partnership, a health advocacy coalition in California, ran a hard-hitting ad directed at Rite Aid in the New York Times that read, "To help a persistent cough go to aisle 8. To get a persistent cough go to aisle 14." The California Medical Association Foundation joined the effort by printing postcards bearing the same message. Christine Fenlon, then director of the Pharmacy Partnership, pointed out that "Alongside remedies for influenza, colds and indigestion, Rite Aid offers its customers a dangerous and addictive drug that kills, not cures." Despite these protests, and even a newly-enacted ban in San Francisco on selling cigarettes in pharmacies, Rite Aid stores in the rest of the country continue selling tobacco alongside medicines and sundries, acting as though it is just another product like toothpaste or paper towels. Rite Aid has all its bases covered, though. It not only contributes to a deadly addiction by selling cigarettes, but also hawks its own house brand of quit-smoking nicotine gum to help people quit. Like Dr. Friedman, Rite Aid believes in getting 'em coming and going.

It is impossible for Dr. Friedman to deny knowing that cigarettes cause cancer and a slew of other diseases, nor can he possibly deny that Rite Aid is contributing to America's disease burden by selling cigarettes. Yet he has maintained this unholy relationship with Rite Aid for the last five years, apparently oblivious to the black eye it gives the City of Hope.

If anyone on Earth should be sensitive to either the fact or appearance of an unethical relationship involving tobacco products, it should be Dr. Friedman. The fact that he profits personally from both creating and treating tobacco-induced diseases is unseemly at best, and at worst downright creepy.

Let's hope the City of Hope deals with this ugly discovery and enacts a strict policy prohibiting its CEOs from engaging in this type of conflict of interest in the future.

By nagging non-smoking people who can't shut up about smoking. This has kinda ruined this website for me. I thought you were doing well until you decided to harrass and try to intimidate smokers like me that don't want to hear another dam word out of people like you. I would rather die of a disease then listen to your bitchin. If I wanted someone to tell me WHAT I SHOULD BE DOING AND WHAT KIND OF PERSONAL DECISIONS I SHOULD MAKE-I'd get fucking married. Who died and made you GOD??? They don't even have any tests that prove conclusively that second-hand smoke HURTS ANYONE! It's NOTHING but greedy people money thing. How much do YOU make trying to make people feel guilty? 'Cause you can take my word for it, I DON'T feel guilty, I'm MAD AS HELL AND I'M NOT GONNA TAKE IT ANYMORE!!! DO YOU UNDERSTAND????? Excuse me while I go make some videos and advertise for the tobacco companies FOR FREE.
Well, I read the article and think it's not trying to make you stop smoking, and is not trying to stop anyone from smoking, it's just reporting a interest conflict of people involved on solving health issues and participating in buisiness making them happend. So I think you should moderate your speach, and try to focus on the topic of the article, but this is my opinion only. I'd feel like an ass if I go to these health institutions and get treatment from MDs like this guys, that are also partners of those that sell me tabacco, this is a around the clock biz for them, get money from selling tabacco, get money from treating tabacco health problems, just doesn't feel right, in a stupid analogy, that would be like the car shop owner that fixes a problem in your car, but unscrews a couple other things, just to have you back in a couple weeks, and keep getting money from you. Anyway, tabacco is a long issue, but wanted to add my two cents. RC <strong class="submitted">Submitted by <a href="http://www.recetasmicocina.es">recetas de cocina española</a> on Thu, 01/29/2009 - 06:04.</strong>
I'm a non smoker myself and work in a non smoking hotel in Prague. However, I don't think its right to tell smokers not to smoke. Everyone has that freedom of choice and its their life, their health. Although, it's also my right and my health not to smoke so I do get annoyed when someone lights up to me in a pub or restaurant without any consideration - and even worse, flick ash on me! Other than that, I'm fine. However, it is disturbing to note that high profile health groups have links with tobacco companies - it brings the paranoia that smoke-related sicknesses are here to stay rather than, tobacco companies finding a way to make smoking cancer free.