As reporters and researchers know all too well, releasing information isn't necessarily the same thing as releasing useful information.

Case in point: the Pentagon's military analyst program. In early 2002, the Defense Department began cultivating "key influentials" -- retired military officers who are frequent media commentators -- to help the Bush administration make the case for invading Iraq. The program expanded over the years, briefing more participants on a wider range of Bush administration talking points, occasionally taking them overseas on the government's dime.

In April 2006, the group was used to counter criticism of then-Defense Secretary Donald Rumsfeld. The apparent coordination between the Pentagon and the pundits piqued the interest of New York Times reporters. Two years later -- after wresting some 8,000 pages of internal documents from the Defense Department -- the Times exposed the Pentagon's covert attempts to shape public opinion through its so-called "message force multipliers." A few weeks later, the Defense Department posted the same documents publicly.

It wasn't the high-octane data dump it first appeared to be. Sure, paging through the emails, slides and briefing papers is interesting, and occasionally you come across something noteworthy. But the documents are formatted in such a way that systematically exploring them via keyword searches is impossible. A cynic (or realist) might think the Pentagon was doing damage control by putting the documents out in the open, while making it near-impossible to find crucial needles in a very large, chaotically-compiled haystack.

Luckily, the Center for Media and Democracy has top-notch tech staff. Thanks to them (especially Blake Hall), we are making searchable versions of the Pentagon pundit documents available, on our SourceWatch website. (A few sections remain unsearchable, because the image quality of the original pages is so poor.)

To see what lurks in the emails of the Pentagon's top PR staff, I searched for a few of the usual suspects.

"I know they are overloaded in theater," reads a June 2006 email from Pentagon pundit Thomas McInerney to Defense Department press secretary Eric Ruff. But "Melanie appears to be very determined to do this with or without DOD support so I think it is worthwhile to work with her." (See pages 44 and 45 of this document for the email.) 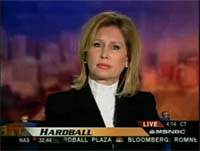 Melanie in this case is Melanie Morgan, a conservative columnist, former San Francisco talk show host and the head of Move America Forward (MAF). MAF describes itself as a non-partisan pro-troop organization, but since its founding in 2004, it's been an enthusiastic cheerleader for the "war on terror" and other Bush administration policies. That's not surprising, as the group was co-founded by, and continues to receive significant support from, the Republican-linked public relations firm Russo Marsh & Rogers. Indeed, some of MAF's most reviled targets have been Democrats; they've called Congresswoman Nancy Pelosi a "domestic enemy" and the 2004 Democratic National Convention "a 'Blame America First' pep rally."

In July 2005, MAF helped bring six conservative talk radio hosts to Iraq, including Morgan and then-MAF board member Buzz Patterson. Dubbed the "'Voices of Soldiers' Truth Tour," the trip sought to "get the story straight from [the troops] without the filter of the liberal media," as Morgan explained to the San Francisco Chronicle.

MAF's 2005 Iraq trip is mentioned in the Pentagon pundit documents, as part of a long list of "intelligence briefings to very important persons (VIPs) and senior officers." Also on that list are Under Secretary of Defense Douglas Feith, multiple executives of the Booz Allen Hamilton lobbying firm, participants in the WHINSEC / School of the Americas Officers Course, the Spanish Ambassador to the United States and Congressman Pete Hoekstra. (See page 5 and surrounding pages in this document for the list.)

The following year, MAF wanted to return to Iraq, this time with people who had lost family members in the war. But it seems like the Pentagon wasn't too hot on the idea at first.

"Any help would be very much appreciated," Morgan emailed to McInerney, as recorded in the Pentagon pundit files. "In the attachment, you will find the letter of response to Centcom [U.S. Central Command] about our Gold Star Family member trip to Iraq."

It's not clear how Morgan knew McInerney had high-level Pentagon access -- an interesting question -- but he did his best to help. McInerney highly recommended MAF's proposed trip to the Pentagon's Ruff, writing that it "sounds like a good idea" and "would get very good play in the media and tell our story with these dedicated families of our deceased members." Ruff quickly responded that he would "check into it." A few months later, MAF's Gold Star families group was in Iraq.

"Under the cover of utmost secrecy, the parents of U.S. troops who died in Iraq have made a surprising and historic visit to Iraq," opens a MAF press release from November 4, 2006, announcing their arrival. "The trip will allow these parents to see the newly liberated Iraq that their children gave their lives for."

In some ways, America Supports You (ASY) is the Pentagon's version of MAF. ASY was launched in November 2004, at the urging of Deputy Assistant Secretary of Defense Allison Barber, who heads the program.

ASY describes itself as "a Department of Defense program that provides opportunities for citizens to show their support for the U.S. Armed Forces." Its activities include organizing and promoting "Freedom Walks," which are held in communities across the country on September 11, and collecting supportive text messages for the troops, which -- in at least some cases -- were not delivered.

The program's goal is to connect "individuals, organizations and companies to hundreds of homefront groups offering a variety of support to the military community." But how ASY goes about making connections has frequently been controversial.

For more than a year now, the Pentagon's Inspector General has been investigating ASY for potentially improper fundraising and financial practices. In late 2007, the investigation widened to include ASY public relations and marketing contracts issued through the military newspaper Starts and Stripes. ASY has also been criticized for repeatedly awarding lucrative contracts to Susan Davis International (SDI), a PR firm headed by a friend of Barber's. A former Pentagon lawyer turned whistleblower has questioned the propriety (PDF) of Barber's "many trips and meetings" with SDI and her "frequent meetings with a variety of corporations."

The Pentagon pundit documents contain several references to ASY's corporate outreach. In an April 2006 email referring to an upcoming event with some 50 members of the Business Council, Barber excitedly wrote to fellow Pentagon public affairs staffer Dallas Lawrence that "we could have our entire corporate outreach for asy [sic] done in one meeting!" (See page 32 of this document.) The agenda for a June 2006 Pentagon meeting with the National Association of Manufacturers lists Barber as giving the "welcome and America Supports You update." ASY is the only program mentioned by name. Other documents name NASCAR, Ringling Brothers and Babies "R" Us as ASY corporate contacts.

Perhaps the most interesting ASY mention in the Pentagon documents is an email from a participant in the January 2005 pundits trip to Iraq. The sender (whose name and address are redacted; see page 29 of this document) wrote to Barber, apparently while still in Iraq: "America Supports You is not well known. I have spoken to about 30 soldiers and Marines and only one knew anything about it and that was because he had just seen a PSA [public service announcement] on AFN [American Forces Network]."

Now It's Your Turn

Do you wonder how the Pentagon used its military analyst program to spin military operations in Afghanistan, the Guantanamo Bay detention center or another issue? Are you curious whether a certain group or person -- say, Vets for Freedom or John McCain -- is mentioned in the Pentagon documents? Now you can easily search through the more than eight thousand pages of Pentagon pundit records.

The text-searchable versions of the documents are available via our SourceWatch article titled, "Pentagon military analyst program: Documents." Multi-document searches can be performed via Scribd.com; just follow this link to our folder of "Pentagon pundit" documents.

In the spirit of collaborative research -- and in the interest of compiling an authoritative record on wartime propaganda -- we ask that you add your findings to SourceWatch, with links back to the relevant Pentagon documents and/or other sources. If you write up your findings elsewhere, please list your piece on SourceWatch, under "External links: Articles" on the Pentagon military analyst program page, and drop us a line at editorATprwatch.org (replace "AT" with "@").

Exposing the workings of the Pentagon's military analyst program isn't merely an academic pursuit. Citizen-driven investigations can help achieve real accountability. Without outside scrutiny, the ongoing investigations of the program -- by the Defense Department's Inspector General, Government Accountability Office and Federal Communications Commission -- may remain in limbo, where the only effect they have is to deflect further calls for action. Or, if the investigations are closed when no one's paying attention, their findings may easily be watered down or never acted upon.

Democracy needs its own "force multipliers." Can you help?

I seriously doubt that the Defense Department can afford to send people overseas for just 10 cents. -- <a href="http://www.fbesp.org/blog">esp</a>
Melanie Morgan came to my attention several years ago after MAF and Howard Kaloogian (co-founder) sponsored a trip to Iraq, supposedly on the dime of those who donate to MAF. To support her claim that the "liberal media" was misrepresenting all the good work being done by US troops in Iraq they posted pictures of peaceful Iraqi streets where merchants were going about their business, no hint of all the terrible events being reported back home. Unfortunately (for them) someone noticed that the shop windows contained no Arabic script. Upon closer scrutiny it was revealed that the picture was actually taken of a street up in Turkey and was quickly pulled down off the site it appeared on, with Kaloogian's explanation that it was just an honest mistake; that he'd stopped over in Turkey and mixed the pics up inadvertently. However his promise to post the "real" pics was followed by using photos taken from high up a building deep within the Green Zone. The shot was so distant and ambiguous in detail that streets were barely discernible, nevertheless what was taking place on them. For me at least, this raised strong questions about the way donations they receive were being spent. Surely he - if he had them that is - could have posted a street scene from somewhere just outside the (Al Rashid?) Hotel without anyone being the wiser about exactly where it was taken? He must realize by now that most conservatives are so desperate to prove themselves right (and liberals wrong) that the <a href="http://www.wam.umd.edu/~hannahk/conservatism.html">cognitive dissonance</a> of having the pics came from within the Green Zone would be so jarring that it would likely never occur to most of them. But his inability to produce such pictures certainly raises questions over exactly what is happening to the money that MAF is <em>constantly</em> soliciting (I wound up having to cancel my MAF e-alert membership due the sheer volume...in spite of my curiosity into whatever new shenanigans she had dreamed up to get some publicity for herself and Howard's soon-to-be rebuffed political aspirations. But now, to find out that MAF had been brought into the fold of the same administration that quipped about how "reality" is merely what they decide to make it, only confirms much of the findings revealed in the meta-study into right-wing conservatism's defining traits. This important study can be found <a href="http://www.wam.umd.edu/~hannahk/nfc.html">here</a> at the Maryland U Counter-Terrorism Panel's look into right-wing personality traits.