A Visit to OhmyNews | PR Watch

On my way home from conferences in Malaysia, I unexpectedly ended up spending a few days in Seoul, South Korea. Thanks to Dan Gillmor, who described OMN as the best manifestation of "journalism-as-a-conversation" model, I was able to connect with OhmyNews (OMN), and fortunate to meet with Mr. Jean Min, the director of OhmyNews International (OMNI), on August 22, 2007.

For those not familiar with OhmyNews, it is a very successful example of citizen journalism at work. In March, 2007, the San Francisco Chronicle called OhmyNews "the most successful citizen journalism effort so far." Based in Seoul, and founded in 2000 by Mr. Oh Yeon-ho, it provides citizen journalists the opportunity to publish original news pieces on the original Korean site, or the newer international site, which is in English. OhmyNews relies on the contributions of over 60,000 citizen reporters worldwide, and OhmyNews International has over 3,000 global citizen reporters writing stories in English from 100 countries. Working to support the citizen journalists are 90 staff members -- approximately 60 editorial staff and 30 tech and administrative.

One of the concerns often voiced about citizen journalism is that it does not meet the standards of professional journalism. But since the start of OMN in 2000, all citizen reporters have been required to abide by a strict Code of Ethics and Reporter's Agreement: 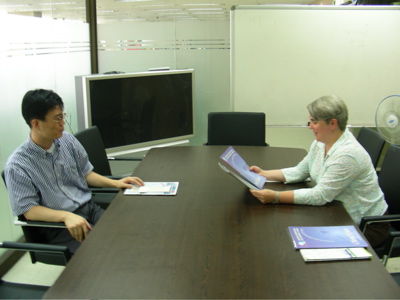 I asked why OMN started in Korea when it did -- was there a special set of circumstances that produced it? Min said that Mr. Oh felt strongly that there were citizen needs in the media that weren't being met. There was a distinct lack of reporting from a progressive perspective. Young people especially felt that they were not being represented in the traditional media outlets and were looking for a way to express themselves. Coupled with high Internet penetration in the early years of the decade, and many early adopters among the young Koreans, the stage was set for a project like OMN.

But Oh didn't rely on a Field of Dreams model -- if you build it, they will come. Instead, before the public launch of the site, he targeted journalism classes at the university level to introduce the concept and recruit a starting roster of reporters. He was able to line up 720 citizen journalists to be in place at the time of the public launch.

Since then, Min feels that word of mouth has been the most successful way to recruit new reporters. OMN has also become a social networking site, where writers and readers interact continuously in a virtual community. This was not an original intent of OMN, but as is often the case, the project has evolved well beyond what the originators imagined. Most contributors today are aged between 20 and 40, with the majority in their thirties. They are fairly progressive politically, which has helped OMN "maintain a creative and distinctive editorial policy." 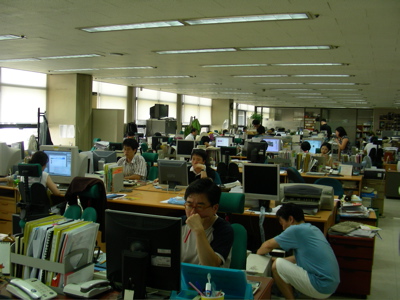 So how do all these thousands of reporters get their stories published? Each story submitted by a citizen journalist is read, critiqued, and edited by a paid editor, who decides if it will be accepted for publication, and if so, what headline to use, which graphics would enhance it, and where to place it on the site. Jean Min himself first started with OMN as a citizen journalist. He shared the nervousness he felt in submitting a story and waiting to see if it would be accepted for publication. Because OMN is also very interactive, Jean said that it took a bit to get used to the comments and criticisms posted in response to his articles, but after getting some "bruises," he learned to appreciate the feedback. And not only did he come to enjoy hearing what readers had to say, it was addictive. To give writers immediate access to those comments, and to let them track the progress of submitted stories, OMN planned to put into place an alert system by which writers could pay to have alerts sent to their cell phone whenever there was a comment posted. In the end, however, OMN decided not to implement it. Min did say that he hoped that if others borrow OMN structures, that they would consider using the alert system.

So, how does OMN pay the bills? 60-70% of their revenue comes from advertising on the sites, about 20% from the syndicated sale of news pieces, and about 10% from miscellaneous sources, including the fees for alerts. A unique form of pass-through income is "tipping" of writers. Not only can readers leave comments about a particular piece, they can also choose to give a monetary tip to the writer. While most stories don't receive tips, some inspire people to give significant amounts. One writer received approximately US$30,000 in only three days from readers in response to a scathing political commentary that attacked a conservative Korean political group. In a different case, a citizen journalist wrote about the challenges a legal immigrant to Korea was facing while trying to access necessary health care and readers contributed over US$30,000 to directly help the subject of the article.

Besides tips that might be received, OMN pays its citizen journalists in "cybercash." These are fees earned depending on placement of an article accepted for publication. Currently, a story published on the main page receives 20,000 Korean won (about US$22). A story published in a section tabbed at the top of the page (headings like interviews, entertainment, world, and science and technology) earns 10,000 Korean won, and a story without a section that is published receives 2,000 Korean won.

Since its start, OMN and its citizen journalists have received attention. Jean Min told me how the mainstream media covered its launch because of the novelty of it. With the tremendous growth -- and growth of influence -- of OMN in the last seven years, however, the mainstream media has been more cautious, especially since the politically progressive perspective of OMN is often at odds with the powers that be and their media supporters. Min thought it was interesting to note, though, that the mainstream media has adopted many techniques to engage readers that OMN pioneered in Korea, so that even the most mainstream publications now encourage comments by readers on their websites and other ways for the public to actively participate in the media.

The Guardian named OhmyNews a Top 5 news site in 2004 for its "interesting hybrid between weblog and pro news site." Time magazine has also selected Kim Hye Won, a Korean housewife and OMN citizen reporter as one of the 15 Netizens that exemplified 'YOU, Person of the Year' in 2006. 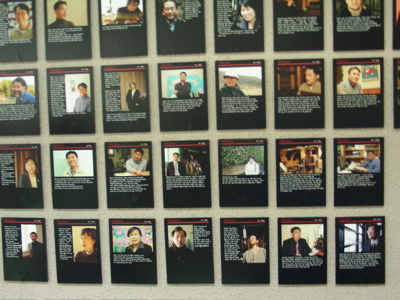 Another measure of the influence of OMN and the respect its citizen reporters have garnered is that nearly 70 OMN citizen journalists have received book contracts as a direct result of their reporting. The OMN newsroom has a wall with a photo plaque for each of those reporters.

The sense at OMN is that despite its meteoric successes, it has far from reached its peak. New innovations for both the original Korean site and the newer international site are in the works, and OMN is branching out into other media, including audio and video. They host an OhmyNews International Citizen Reporters' Forum each year, and are solidly on the leading edge of the still developing field of citizen journalism.

Just today Jean Min let me know that OMN just launched OhmyNews 2.0 for the Korean edition this week. Min said, "OhmyNews 2.0 could be described as a hybrid between the New York Times, Digg and MySpace. We are evolving from citizen journalism to citizen programming." An exciting evolution, and certainly not the last for OMN.

Personally, I look forward to becoming a reporter for OMNI. If you are interested in trying your hand at OMNI reporting, go here to get started. And while you're at it, please think about flexing your citizen journalism muscles on our SourceWatch site, which is a collaborative encyclopedia of people, issues, and organizations shaping the public agenda. If this is your first time editing on SourceWatch, you can register here, and learn more about adding information to the site here and here.