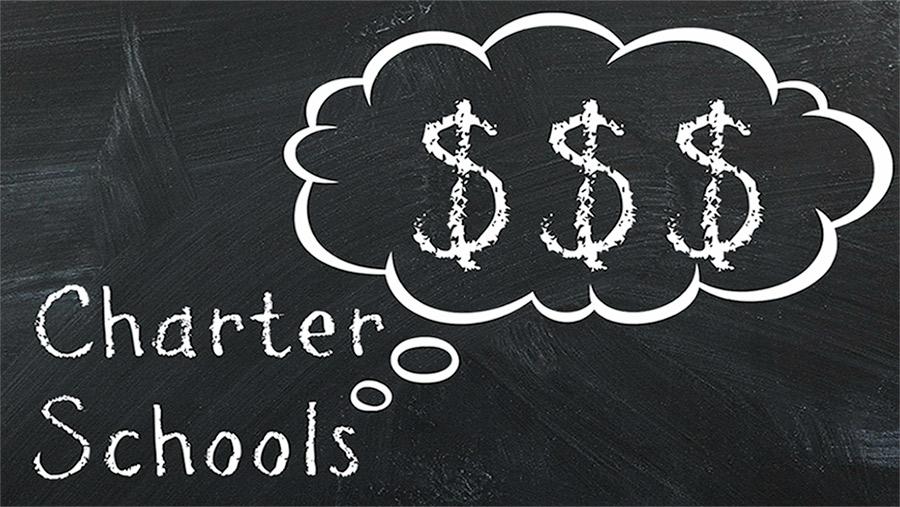 Madison, WI (CMD) – Today the Center for Media and Democracy (CMD) is releasing a special report on its year-long investigation into charter schools spending in the United States. You can access the full report "Charter School Black Hole" here.

CMD, a national investigative group that conducts in-depth investigations into the influence of corporations, trade groups, and PR firms on media and democracy, found that the public does not have ready access to key information about how their federal and state taxes are being spent to fuel the charter school industry since charters began almost 25 years ago.

Indeed, no one even knew how much the federal government had spent on its program designed to boost the charter sector. So CMD reviewed more than two decades of federal authorizations and appropriations to calculate the sum, which is now more than $3.7 billion—as noted in this new report. CMD also found that the federal government was not providing the public with a list of all the charter schools that received federal tax monies and how much.

CMD also found that many states have not provided the public with ready information about the amounts of federal funding each charter has received under the federal "Charter School Program" (CSP) for state education agencies (SEAs), and that most states have not provided the public with information about the amounts in state and federal tax dollars that have been diverted to charters rather than spent strengthening traditional public schools.

What is even more troubling is how difficult it is to find essential information on how some charters have spent federal and state tax dollars, even as governments continue to increase funding for charters while slashing funds for traditional public schools. Unlike truly public schools that have to account for prospective and past spending in public budgets provided to democratically elected school boards, charter spending of tax monies is too often a black hole.

This is the largely due to the way the charter industry has been built by proponents, favoring "flexibility" over rules. That flexibility has allowed an epidemic of fraud, waste, and mismanagement that would not be tolerated in public schools. Charters are often policed—if they are really policed at all—by charter proponents, both within government agencies and within private entities tasked with oversight as "authorizers" of charters.

In this investigation, CMD pursued numerous open records requests under federal or state law about how much federal CSP money had been given to charters and how that money was spent in 12 states. As a result, CMD found that public information about funds received and spent by charters is severely lacking. It also documented how little is known about spending by closed charters, and identified "ghost" schools, where federal grants were awarded to charters that never opened.

"The bottom-line is taxpayers know far too little about how much their federal tax dollars are being used to fund charters and there is far too little information provided by states about how tax monies are being spent by charters or by for-profit firms they are tied to," said Lisa Graves, Executive Director of CMD. "Neither the federal government nor the states require charters to publish that information on their websites and neither the federal or state governments we examined publish that information themselves. Even aside from serious questions about academic performance by charters—especially online charters—the lack of real accountability remains a real problem for kids and families, as more and more people and corporations have sought to get a piece of pie, a revenue stream from taxpayer money, to operate or assist charters."

Below are a few key findings from the report:

Michigan: In 2011 and 2012, $3.7 million in federal taxpayer money was awarded to 25 Michigan "ghost" schools that never even opened to students. The organizations behind these schools received at least $1.7 million, according to the state expenditure database. WestEd—a private company that contracts with the U.S. Department of Education to monitor how states comply with federal regulations—flagged this as a potential problem, but the agency did little to address the problem. After verbal assurances that this would not happen again, the federal agency assured the Michigan Department of Education "that there will not be any additional follow-up."

Ohio: Out of the 88 schools created by planning and implementation grants under CSP between 2008 and 2013, at least 15 closed within a few years; a further seven schools never even opened. These charters received more than $4 million in federal taxpayer money. Despite this track record, Ohio landed the biggest one-year grant by far in the 2015 competition for federal funding: $32.6 million. CMD can reveal that part of the reason Ohio won the grant was a glowing endorsement from the National Association of Charter School Authorizers (NACSA)—an organization that had previously referred to the charter system in Ohio as "broken." But NACSA was more than willing to take that back as long as the Ohio Department of Education signed a $40,000-a-year deal. The deal was brokered by former NACSA senior executive and lobbyist David Hansen only days before he resigned as head of the Ohio Office of Quality School Choice amid accusations of having manipulated charter school performance data.

California: More than $4.7 million in federal taxpayer money was handed out to create charter schools that subsequently closed within a few years. CMD's investigation found that California's record on charters is marked by continued failures, including squandering of taxpayer money, along with deference to unaccountable authorizers and resistance to federal efforts to mandate better state oversight.

Wisconsin: More than $2.5 million in CSP money was used to create charter schools that shuttered shortly thereafter. In addition to the school closings, at least one of the schools created by federal charter school money was a former religious school that has since "converted" to charter status so as to be eligible for funding, an audit obtained by CMD shows. There appears to have been no regular evaluations about whether such conversions in Wisconsin--and also Texas--affect the content of the instruction or not.

Indiana: At least $2.2 million was awarded to charters that either closed or never opened. In addition, emails obtained by CMD through a public records request to Gov. Pence's office found troubling examples of how the private charter sector, notably for-profit chain Charter Schools USA, influences on policy-making.

New York State: CMD discovered that almost every single application for the New York subgrants was written by the same multi-million-dollar charter consultancy firm: Charter School Business Management. The nature of CSP funding competition means that charter schools relying on private contractors for services, such as grant-writing and budgeting, can gain a competitive edge.

Click here for a complete state-by-state list of charter schools that were created by CSP SEA seed money in the 2010-2015 grant cycle. Dozens of these "schools" never opened to students in the first place, and many of the schools that did open have since closed.

For an updated tally of the $3.7 billion disbursed under the CSP umbrella since the inception of the program, click here.

Click here for emails from Ohio's Office of Quality School Choice, detailing the role NACSA and David Hansen, who resigned in July amid accusations of having manipulated data on charter school "success," played in securing the biggest federal charter grant in 2015.

I HAVE BEEN WAITING FOR A VERY LONG TIME FOR SOMEONE TO WAKE UP ABOUT THE CHARTER SCHOOLS,THEY ARE A OPEN TRAVISTY BUT NO ONE SEEMS TO BE SAYING ANYTHING ABOUT IT. ALL BECAUSE OF OUR STANDING ON THAT STUPID RELIANCE ON THAT PISA STANDARD INTERNATIONAL TEST THAT NO ONE REALLY SEEMS TO KNOW MUCH ABOUT EXCEPT THAT WE INCLUDED OUR STUDENT SCORES FROM ALL OUR STUDENTS WHILE EVERY ONE ELSE,EXCEPT FINLAND, ONLY REPORTS THE SCORES OF THEIR MORE RICH SCHOOL DISTRICTS. AND CHINA HAS THE ANSWERS FOR SALE BY SOME HOOK OR CROOK I HAVE READ MORE THAN ONCE. THE WORST THING ABOUT IT IS THAT OUR STUDENTS ARE THE ONES SUFFERING FROM OUR LACK OF ATTENTION BY OUR LEGISLATORS WHO SEEM ALL TO READY TO GET RID OF OUR PUBLIC SCHOOL SYSTEM BECAUSE THERE IS SO MUCH MONEY TO BE MADE BY BUSINESSES TAKING OVER THE RUNNING OF THE PUBLIC SCHOOLS. WE SPEND 6 BILLION A YEAR ON EDUCATION AND BUSINESS WANTS IN ON IT. BUT OF COURSE THEY HAVE TO GET RID OF THE TEACHERS INFLUENCE SO THEY CAN CONTROLL THE WAY MONEY IS SPENT. AND THEY HAVE DONE THAT. THE TESTING INDUSTRY ALONE IS COSTING US BILLIONS EVEN THOUGH IT'S CAUSING YOUNG STUDENTS TO BECOME ILL, START TO CRY, AND DISLIKE SCHOOL. AND NOW THEIR SCORES ARE DROPING INSTEAD OF IMPROVING AS PEARSON, THE MAJOR TEST MAKER, WHO HAS NO EXPERIENCE OR TRAINING IS EDUCATION PREDICTED. AND HE COMES FROM ENGLAND. THE SHAMEFULL COROPORATION BETWEEN OUR GOVERMENT, THE CHARTER AND PRIVATE SCHOOLS IS JUST ANOTHER INSTANCE OF THE PRESSURS THE VERY RICH ARE INFLICTING ON OUR DEMOCRACY OR WHAT WE HAVE LEFT OF IT.
Margaret Burns - if you actually believe that the reason students are becoming ill, crying and disliking school is tied to private or charter schools, you indeed have drank vast quantities of the Kool-Aid. While I believe these schools who have received funding and failed to open should be investigated, I believe there is a deeper underlying agenda present. I don't think this is the place to get into that conversation - but Mrs. Burns, let me make one thing very clear to you. If public schools were actually teaching the students information, no wait, accurate and truthful, and useful information, then there would be a higher attendance at your public schools. The public school system has failed. Failed America and most disheartening, failed the youth, the student. They have failed because of the influence that politics has had in the content that public schools are instructed to teach. Today, public school students are taught to take a test. A very specific test. In fact in the Atlanta airport, during a flight delay, I struck up a conversation with an older lady. I found out where she was from - near my town and asked what she did. She told me she was a teacher - for 35 years, in the Killeen ISD. I then asked, "What do you teach?" Her response floored me, but rung with such truth and honesty, I could only shake my head. She looked at me and replied, "Nothing." I paused for a moment to allow the magnitude of that revelatory comment to sink in. She just told me, "I teach nothing to our kids." Not because she's lazy and plays crossword puzzles or mahjong, it's because the polity of public school system has become so bogged down with garbage and a pure focus on taking some ridiculous test for money that she spoke volumes of truth. Even the material has changed over the years. Not toward the truth, but toward POLITICAL CORRECTNESS. Of course that falls smack dab in the middle of said agenda of prwatch and every single entity attached. Liberalism to the nth degree. I can feel myself about to go on a tangent of the hypocrisy of claiming to provide UNBIASED reporting and investigative analysis. Only unbiased if you are a devout liberal! So yes, private schools and charter schools are necessary. They are necessary so that the United States of American can continue to be competitive in the market place. They are necessary to prevent America from becoming a state of ignorant sheep. Our country needs a desperate change and I don't mean the kind that your guy POTUS has brought upon us, but real change - good change. Our public schools need the same. They need a revival. A revival of truth, character and integrity. A revival of the purpose in which teachers felt "called" to this profession. To actually teach - to make a positive influence upon a generation that is coming after them, but to whom the state of our country rests squarely upon their shoulders.