The U.S. media told the public for weeks that a big, offensive battle was taking place in Marja, in Afghanistan, a "city of 80,000 people" in Helmand province which was also the logistical hub of the Taliban. The description gave the impression that the U.S. presence in Marja was a major strategic objective, and that the city was more important than other district centers in the province.

As President Obama moves ahead with health care reform, interest groups on both sides of the issue are again ramping up their lobbying efforts. Robert Zirkelbach of America's Health Insurance Plans, the insurance industry's top lobbying group, said his industry is making "a big effort" to counteract attacks from Obama and other Democrats, who have pointed to hefty premium increases to show why health care reform is needed. 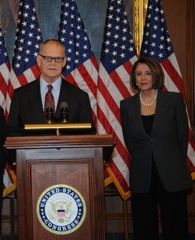 Ex-Alaska Governor Sarah Palin is becoming more vocal and visible in recent days, and indications are that the upswing will continue.

In a video posted on YouTube on February 3, House Representative Barney Frank (D-Massachusetts) explains how the right wing media machine creates and spreads disinformation in an effort to smear the left. "Disinformation" should not be confused with "misinformation," the unintentional form of wrong information. Disinformation is produced by people who intend to mislead their audience.

Frank tells how John Fund, an editorial writer for the Wall Street Journal, told a lie about him in November of last year: In a speech at a conservative function in Florida called "Restoration Weekend," Fund claimed that, after losing the special election in Massachusetts, Democrats Chuck Schumer and Barney Frank were going to propose a bill to create universal voter registration. Fund further stated that Democrats were going to add all welfare recipients and unemployed people to the voter rolls, and he called it "felon re-enfranchisement." In reality, Frank explains, there was no such bill.