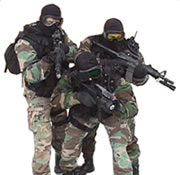 U.S. troops in Baghdad "blasted their way into the home of an Iraqi journalist" working with British media outlets on an investigation of "claims that tens of millions of dollars worth of Iraqi funds held by the Americans and British have been misused or misappropriated." The troops fired into the room where Dr. Ali Fadhil, an award-winning journalist, and his family were sleeping, then hooded and detained him for a few hours. The troops also took videotapes related to the documentary, which have not yet been returned. Callum Macrae, the director of the documentary, called "the timing and the nature" of the raid "extremely disturbing," as it came days after they explained the project to U.S. authorities. "We need a convincing assurance from the American authorities that this terrifying experience was not harassment and a crude attempt to discourage Ali's investigation," said Macrae.