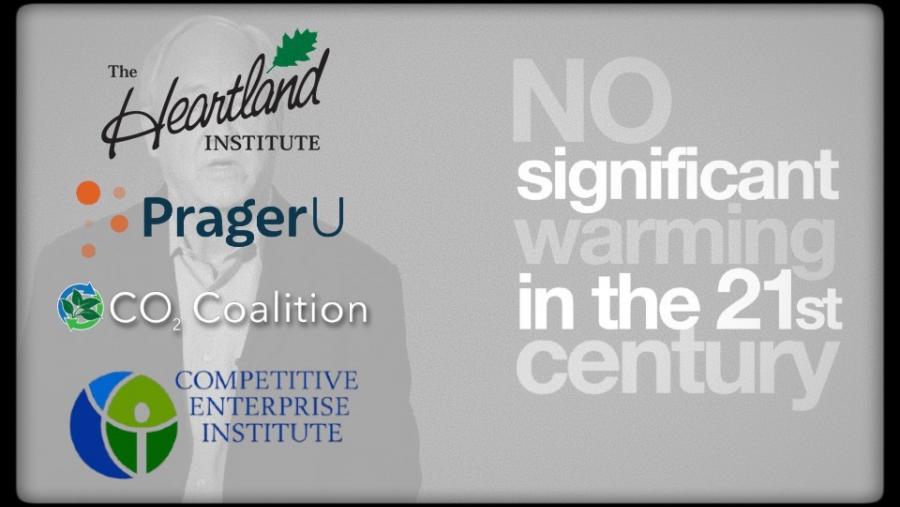 YouTube's two billion monthly users are being subjected to climate change denial, even after its parent company, Google, committed to fighting harmful misinformation about science.

A report published by the nonprofit activist network Avaaz details the wide reach of this climate disinformation and points to dozens of companies and even multiple environmental organizations that advertise on videos that deny the existence of manmade climate change. Money from these ads goes to the videos’ creators, incentivizing the production of climate disinformation.

YouTube's algorithms promote videos that feature climate change denial, most prominently by way of its "Up Next" feature. Seventy percent of the time users spend on YouTube is driven by the company's recommendations. Climate misinformation content pops up in YouTube searches for the terms "global warming," "climate change," and "climate manipulation."

Of the four egregious anti-climate science videos analyzed in depth by Avaaz, three feature men who are, or have been, part of the climate change denial network spearheaded by billionaire oil magnate Charles Koch. This Koch network, which includes think tanks such as the Heritage Foundation, the Property and Environment Research Center, and the CO2 Coalition, has been the subject of much reporting, but its reach into YouTube, the preferred platform for U.S. teenagers, has been less thoroughly examined.

Multiple videos highlighted by Avaaz were created by PragerU, a right-wing content producer that publishes disinformation on an array of topics including climate science, racism, and free-market capitalism and is funded by the 501(c)(3) Prager University Foundation. The group itself has not received direct donations from Koch's family foundations in the past several years, but it has gotten money from DonorsTrust, a donor-advised fund sponsor used by Koch to disperse donations (over $55,000 since 2017), and larger amounts from foundations run by Koch network donors the Wilks brothers (close to $3.3 million from two family foundations since 2015), and from Koch network donors the Bradley Foundation and Bradley Impact Fund (nearly $1.1 million since 2015).

"No significant warming in the 21st century"

PragerU's video, "What They Haven't Told You about Climate Change," features a climate change denier who is affiliated with Koch-funded think tanks. Patrick Moore, who has been an energy and climate adviser at the Heartland Institute and chairman of the board of the CO2 Coalition, falsely claims in the video that there has been "no significant warming in the 21st century."

The Heartland Institute, which once received funding from ExxonMobil and the American Petroleum Institute, hasn't gotten direct donations from Koch's family foundations in recent years, but DonorsTrust and sister nonprofit Donors Capital Fund combined to give the institute over $10.6 million from 2014-18. The family foundation of billionaire GOP mega-donor Robert Mercer gave close to $2.6 million during that time period, and other Koch network donors such as the Ed Uihlein Family Foundation ($354,000), the Bradley Impact Fund ($211,000), and the Searle Freedom Trust($150,000) also contributed.

The American Fuel and Petrochemical Manufacturers, a lobbying group for oil makers including ExxonMobil, Chevron, and Koch Industries, donated $75,000 to the Heartland Institute in 2017. Two executives of Flint Hills Resources, a subsidiary of Koch Industries that produces oil and petrochemicals, are members of the group's board.

The Heartland Institute's climate disinformation campaign does not stop at the U.S. border. A new investigation by the European investigative nonprofit Correctiv reveals that the Heartland Institute is supporting climate change deniers in Germany and is working with a YouTube personality affiliated with the far-right political party Alternative für Deutschland.

Patrick Michaels, previously the longtime director of the libertarian Cato Institute's Center for the Study of Science, is currently a senior fellow at the Competitive Enterprise Institute (CEI), where he focuses on climate at its Center for Energy and Environment. Cato shuttered its Center for the Study of Science in May 2019 after Michaels left. According to Michaels, "They informed me that they didn’t think their vision of a think tank was in the science business."

In a clip from a Fox News interview, titled on YouTube as "The truth about global warming," Michaels claims that all but one of the United Nations' 32 climate models are "flawed by design to vastly over-predict warming," a statement Avaaz says is misinformation.

The Cato Institute, which was co-founded by Charles Koch and had the late David Koch on its board of directors, is funded by numerous Koch network donors, including the two Koch foundations, which gave $9.3 million from 2014-18. Since 2014, Cato's donors include:

The two Koch foundations gave CEI $288,000 from 2014-17. DonorsTrust and Donors Capital Fund combined to give nearly $3.9 million to CEI since 2014, and the Lynde and Harry Bradley Foundation, the Sarah Scaife Foundation, and the Searle Freedom Trust have all contributed over $1 million since then.

The American Fuel and Petrochemical Manufacturers gave $95,000 to CEI from 2015-17, and another industry trade group, the American Petroleum Institute, has donated $70,000 to CEI since 2015.

Another PragerU video, "Climate Change: What Do Scientists Say?" features Richard Lindzen, a former senior fellow at the Cato Institute's Center for the Study of Science. Lindzen claims, "There is no evidence that CO2 emissions are the dominant factor [in climate change]," which is decidedly false.

In 2017, Lindzen wrote a letter to Trump urging him to back out of the Paris Climate Agreement, claiming that carbon dioxide is not a pollutant. Twenty-two current and former faculty members at Massachusetts Institute of Technology, where Lindzen had been a professor, then wrote to the president to make it clear they did not share Lindzen's views.

Avaaz found over 100 advertisers on climate disinformation videos. Many are major brands such as Samsung, L'Oréal, Decathlon, Danone, Warner Bros. One in five ads came from green or ethical brands including Greenpeace International, WWF and Save the Children. A number of the advertisers told Avaaz that they were unaware their ads were running on these videos and financially supporting their creators.

To stem the spread of falsehoods and misinformation around climate change, Avaaz recommends that YouTube:

"Avaaz believes that YouTube has the opportunity to be a trailblazer in the fight against misinformation..." reads the report. "Now is the time for YouTube to act more systematically and more urgently to implement solutions, like the recommendations described above, to ensure this new decade is not plagued by the disinformation problems started in the last one."

"Similarly, advertisers must both ensure that they follow through on their own corporate social responsibility commitments and track what kind of content their advertising revenue is inadvertently funding."

YouTube says that to combat misinformation, it removes content that violates the company's Community Guidelines. However, false information doesn’t violate the guidelines unless it includes hate speech or harassment, incites violence, or is a scam.

The following statement from a YouTube spokesperson to CMD explains other ways it attempts to reduce the spread of misinformation:

We can't speak to Avaaz’s methodology or results, and our recommendations systems are not designed to filter or demote videos or channels based on specific perspectives. We've significantly invested in reducing recommendations of borderline content and harmful misinformation, and raising up authoritative voices on YouTube. In 2019 alone, the consumption on authoritative news publishers' channels grew by 60%. As our systems appear to have done in the majority of cases in this report, we prioritize authoritative voices for millions of news and information queries, and surface information panels on topics prone to misinformation--including climate change--to provide users with context alongside their content. We continue to expand these efforts to more topics and countries.