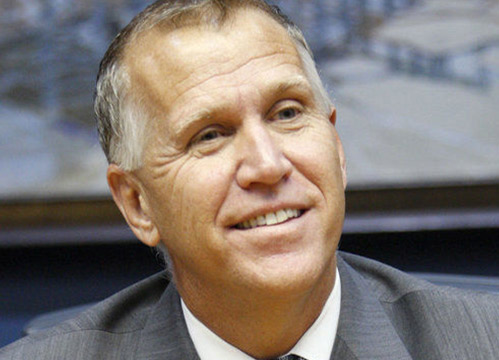 Some powerful players are coming to the aid of ALEC board member Thom Tillis, the Speaker of the North Carolina House of Representatives who seeks to challenge Democrat Kay Hagen for her U.S. Senate seat. The North Carolina race could determine control of the U.S. Senate. If Tillis, a member of ALEC's board of directors and the 2011 ALEC “Legislator of the Year,'' can make it through the May 6 GOP primary, which he is currently leading, he will face Kagen this November.

David Koch's Americans for Prosperity (AFP) has released a series of television ads attacking Hagen for her support of the Affordable Care Act. AFP has long been a member of ALEC, and both David and Charles Koch have made personal loans to ALEC and funded the group through their foundations. Additionally, a Koch Industries lobbyist sits on the national board of ALEC -- along with Tillis. The connections that Tillis has cultivated through ALEC appear to have paid off.

AFP has already spent a whopping $7 million in dark money "issue ads" on the North Carolina U.S. Senate race, largely targeting Hagen with ads like this one that claim huge numbers of people are losing their health insurance in the state. That's roughly 44 percent of all the money AFP has spent on U.S. Senate races this cycle and these are early days.

Karl Rove's super PAC, American Crossroads, is also in the middle of a $1.1 million ad blitz designed to help Tillis avoid a runoff May 6, the Washington Post reports. Interestingly, Crossroads first ad attacks Hagen, and praises Tillis over their differing positions on the state's voter ID restrictions. ALEC has been tied to the nationwide spread of voter ID laws since 2010, and North Carolina is no exception: the 2013 law was sponsored by an array of ALEC members.

To fight back, Hagen is not only applauding the fact that 7 million or more Americans signed up for the Affordable Care Act (including 200,000 from North Carolina), but also trying to make hay with Tillis' connections to the Koch brothers' agenda. Her campaign has sponsored a new website called TillisKochAgenda.com detailing the similarities between the positions put forward by Tillis and AFP. 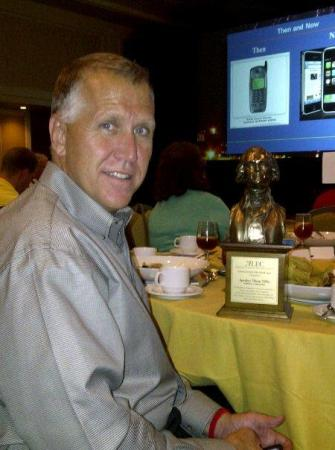 Tillis is a longtime member of ALEC, but has gone beyond the normal duties of copying and pasting corporate-approved legislation in North Carolina's state house. Tillis has become an important leader in ALEC.

He is one of just 21 state legislators from across the country on ALEC's national board. The legislative board meets jointly with the corporate lobbyists on ALEC "private enterprise" board, which includes top political givers like Koch Industries, Exxon Mobil, AT&T, and PhRMA. As part of his Board duties, ALEC named Tillis as a potential fundraiser for the group in internal documents released by The Guardian in December 2013.

Tillis has also been a member of the International Relations Task Force. After helping push the ALEC agenda in North Carolina for years, Tillis received ALEC's “Legislator of the Year'' award in 2011.

In addition to having the speaker of the North Carolina House as one its key organizational leaders, ALEC counts 54 of North Carolina's 170 lawmakers as members, according to internal documents from 2013 leaked to The Guardian.

In 2013, after Republicans gained control of the North Carolina legislature and governor's mansion for the first time since 1870, an array of right-wing legislation reflecting ALEC templates swept through the legislature. Both the Raleigh News-Observer and CMD found dozens of ALEC bills introduced in 2013, including measures that promote voter suppression, union busting, public funding of private schools, and the repeal of clean energy laws.

The onslaught of ALEC-influenced legislation in 2013 helped give rise to North Carolina's "Moral Mondays" movement.

North Carolina is no stranger to right-wing groups attempting to control its state government. Right-wing mega-donor Art Pope, a close confidant of the Koch brothers, continues to exert his influence in the legislature and promote the ALEC agenda. Additionally, North Carolina is home to two State Policy Network “think tanks,'' the John Locke Foundation and Civitas Institute. Both are largely funded by Pope and The Guardian documents reveal both have been members of ALEC. Pope, who serves on the board of the Kochs' AFP, is also reportedly supporting Tillis in the primary.

If Tillis wins the primary and the general election, he would be joining a large group of ALEC alumni in Congress. ALEC claims to have 91 alums serving in Congress, 82 in the U.S. House and 9 in the U.S. Senate. ALEC alumni in Congress include North Carolina's Rep. Howard Coble (R) and Walter Jones (R), along with House Speaker John Boehner (R-OH), House Majority Leader Eric Cantor (R-VA), Sen. Lindsey Graham (R-SC), and Senator Marco Rubio (R-FL). Additionally, Sen. Ted Cruz (R-TX) said he has been “privileged to work with ALEC'' and Rep. Paul Ryan (R-WI) says he is a “fan of ALEC'' and “has “followed ALEC for many years.'' Both Cruz and Ryan were featured speakers at ALEC's 2013 conference in Washington, DC.

Stay tuned. Tillis must make it through the primary and the general election before he has any hope of joining this illustrious crowd.