At the Mt. View gas station in Wausau, Wisconsin last week, some motorists were able to secure a gallon of gas for $1.84, thanks to a subsidy from David Koch's Americans for Prosperity. These astroturf publicity stunts have taken place at gas stations around the country in recent weeks as part of AFP's effort to mobilize votes for Mitt Romney by drawing attention to an alleged rise in gas prices since President Barack Obama took office. But since most experts attribute the rise in gas prices to long term trends and crude oil commodity speculation, AFP's hijinks only underscore the role of Wall Street speculators -- including the Kochs themselves -- in jacking up critical commodity prices on average Americans.

The gas giveaway is part of AFP's larger "Obama's Failed Agenda" bus tour criss-crossing the nation from New Jersey to Wisconsin, where the group will spend the final days of the campaign.

AFP says the stunt is an attempt "To show just how bad policies lead to higher costs for American families," and places the blame for the rise in energy prices entirely on "Obama's policies." AFP New Jersey Director Steve Lonegan claims the increase in gas prices is due mostly to Obama's "radical, ideologically-driven 'green agenda' that has driven up gas prices to twice as high as they were four years ago," which is nearly identical to comments made by AFP directors in other states.

Throughout the early 2000s oil and gas prices had been following an upward trend, peaking in mid-2008 then plummeting briefly just before Obama took office as the result of the global economic downturn. 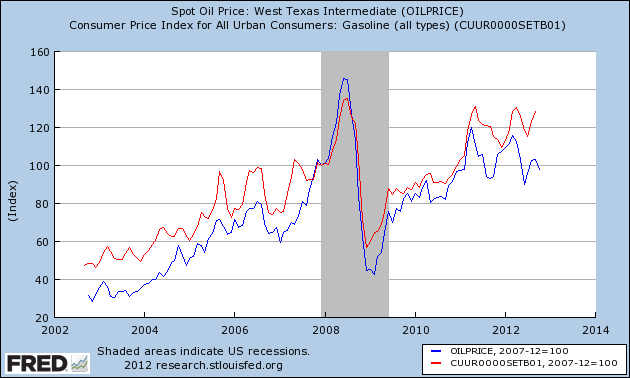 More importantly, AFP's energy campaign relies on the false notion that oil prices are determined strictly by the laws of domestic supply and demand: that prices would fall if only, somehow, the supply of oil were increased (perhaps by increased offshore drilling or the Keystone XL pipeline, both of which AFP supports).

In reality, the price of gas at the pump is determined by a host of other factors, particularly rampant speculation in the oil market which artificially drives up the price of oil, creating a new value based not on supply or demand, but on the intricacies of trading at any given time. An internal report published this year by Goldman Sachs estimates oil speculation may contribute as much as $20 to every barrel of crude oil.

Kochs Contribute to (and Profit From) High Gas Prices

While Koch Industries is a privately held company, evidence suggests that Charles and David Koch have profited enormously from the private, unregulated oil exchange market. The brothers are industry leaders in oil speculation and pioneered the first oil trading schemes in the 1980's. They have also artificially restricted the supply of oil by buying up large quantities of crude oil and holding it offshore in tankers -- hardly the behavior of a corporation concerned about "higher costs for American families."

Since the economic recession began in 2008, the Kochs [http://www.ifg.org/ have exponentially increased their wealth] by 58 percent while median family net worth dropped 40 percent. When fully implemented, the new Wall Street reform rules that bring transparency to the derivatives market might show us how much of this profit is due to oil speculation.

It is no wonder the Koch's fought hard to oppose it -- or why they are trying to put the blame for high gas prices elsewhere.

Google the "$2.5 Trillion Oil Scam - slideshare" and google the "Global Oil Scam. The US is a victim of this scam. The Koch brothers are "silent partners" in the IntercontinentalExchange(ICE). Plug your electric car into your household, solar power battery.
The Goldman-Sachs number is ludicrous. In 2008, when Crude Oil hit $145, then dropped to $32 a Barrel, that Difference is YOUR effing Speculator Payoff. The US Wholesale Payout alone since 2006 is $2.2 Trillion, from a Gross or Net Wholesale Gasoline/Fuelburned out the tailpipe of $3.6 Trillion. This is the USDomestic Number NOT THE WORLDWIDE PILLAGING THESE SPECULATORS HAVE CAUSED WHICH INCLUDES THE ARAB SPRING. Stupid and INSIPID regulators and GOP Love Bunnies are your a__holes. Along with The Goldman-Sachs, et.al. THE GREAT ENERGY ROBBERY CONTINUES AT $1 Billion Per Day for the US. ADD ANOTHER $2.5 Billion per Day for the rest of the World's Economies and you have Pure Economic Servitude. And Collapse.
Every single American should read this article and forward it to their representative in Congress. This is a great informative article that explains how the whole world is being ripped off at the pump by the oil manipulation by big oil. I applaud the author for having the courage to put the truth out there for the world to read. Thank you, Terry Steward
OK, assuming that 25% of oil rise is attributed to speculators, and carry that forward to the price of gasoline(I know simple viewpoint). Then speculation contributed $1 to the price of gas. What about the other $1+ ?? Simple economic theory tells us that supply and demand are the largest and most important factors affecting the price of commodities. To imply that an increased supply would have no effect on the prices at the pump is very misleading. It that were true then the price would not be affected by everyone in China and India suddenly buying a car a driving around. The supply/demand has a definite effect on the speculators as well. Let's assume that the Kochs have massive volumes of oil stored at sea. Then suddenly we open up drilling and pipelines at the same time. Add to that the greatly increased MPG of cars and the lowered number of miles per driver in the USA(lowering demand). If all of those factors hit at once(higher supply & lower demand), the Koch s and other speculators would loose everything. Granted the MPG and miles driven are only for half of the worlds demand, but all of these factors DO effect the price at the pump. And government policies and leanings do effect these things including the speculators. To dismiss one factor (supply), and focus mostly on only one factor (speculation) is crazy. A very large factor in the price of gasoline is the refinery capacity. There can be all the oil stored that you want, but once you hit a certain level of consumption of gasoline in the USA the price will go up simply because the supply of gasoline is limited by the capacity of our refineries. Our operating capacity in refineries is essentially the same as it was in 1982. In 1982 the USA consumed under 2,400,000 barrels in 2011 we consumed just under 3,200,000. As you can see that is a 33% increase in consumption(demand) with no increased in refining capacity(supply). Any government interested in providing low gasoline costs for its people would provide incentives for the building or overhaul of refineries. Instead our government blocks this type of action indirectly and directly. A true leader takes control and responsibility for all factors, some within our control and on the others it is how we react to things outside our control. They do not take credit for higher MPG and then blame everything else on other factors.